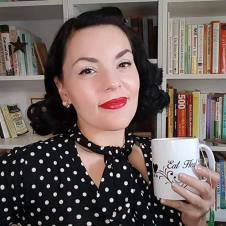 Diagnosed with Multiple Sclerosis in 2001.
Health conscious and relapse free since 2007!

It’s been nineteen years since I was diagnosed with Multiple Sclerosis. These days, I don’t feel as though I’m simply living with the illness — I’m thriving. It hasn’t been easy getting to this point, but I truly believe that I’ve figured out how to control my symptoms and the progression of this terrible illness. I lived relapse-free for ten years during this illness and continue to feel the best I’ve ever felt despite experiencing a a relapse and new symptoms at the end of 2019. Some say that I’ve been lucky; I can’t disagree. But I also believe there is power in knowledge and strength in determination. As time passed, I became driven by the idea that I would not let a medical diagnosis control the outcome of my life. When I look back to the beginning of my life with MS, it’s hard to believe I’ve come this far …

Five days. Three MRIs. One prognosis. Visiting hours were over and I was all alone, numb from the waist down, propped up in my bed flipping through the channels on one of those tiny hospital room television sets. With nothing else worth watching, I stopped on some celebrity entertainment show to pass the time. There was a feature on Hollywood starlet Annette Funicello. Interesting enough — I loved her style and had always enjoyed watching her in those 1960s beach party flicks. But the topic of the hour was not about her acting career. She was in a wheelchair talking about Multiple Sclerosis, an illness she had been diagnosed with in 1987. An illness I didn’t know much about.

Her story was so moving that I actually remember crying as I watched with a lump in my throat. I admired her bravery and strength for working so diligently throughout her career while secretly carrying the burden of suffering with such a debilitating illness. I remember thinking to myself, “thank goodness I don’t have what she has”. Little did I know that the very next day I would be diagnosed with the very same thing! The only way I can explain this bizarre coincidence is that I believe everything happens for a reason. I feel I was meant to be in that hospital room on that exact day, at that exact hour, listening to one of my biggest Hollywood idols tell of her life story, struggles and successes; perhaps it was meant to give me strength during the days and years to follow.

I remember my first appointment with a neurologist after my diagnosis. During the course of that meeting, while I was taking in the picture of what this disease would mean for my future, I asked him if there was any special diet I should be following or supplements I should be taking. He simply said,

“No, I’m sorry. There’s nothing you can do. Carry on as normal. In all likelihood you’ll end up in a wheelchair within the next fifteen years. There is no cure”.

He didn’t even know what my normal way of eating was, which pretty much consisted entirely of processed food, sugary snacks and loads of caffeine to keep me going — yet he confidently dismissed any notion that diet could play a role or offer any hope for recovery. I took him at his word — he was the doctor with framed proof of his expertise on his wall after all — and for the subsequent six years, I didn’t change a thing with regards to my diet or lifestyle. Instead, I took the traditional approach, choosing to go on medication while I kept eating my “normal” diet of processed foods — things like frozen chicken fingers, take-out fried rice and anything that was easy to prepare and came out of a can. And my health continued to worsen.

Years passed of terribly painful relapses. Excruciating pins and needle sensations in my legs and cluster headaches were a normal part of life. On top of that, I caught every cold and flu that seemed to go around and I was so tired and sluggish all I ever wanted to do was sleep. I also suffered from deep bouts of depression. I knew I needed to make some changes.

Then one day during an especially painful relapse, my sister came to visit. She brought with her a bundle of healthy food and spices and said they were ‘anti-inflammatory’ — whatever that meant. She had been doing research and read that diet could have a big impact on this illnesses. Sweet of her, I thought; but the message didn’t kick in immediately. Still, ever so slowly I started to make alterations to my diet. Instead of having instant cup-a-soup for lunch, I started making large, luscious salads more colourful than a kaleidoscope. I replaced my heavily sweetened morning coffee with herbal tea and started researching how I could improve my energy with healthier food choices.

Over the course of a year, I completely swapped out all of the fast food, high sugar junk foods I had been eating for so long, in place of a nutrient-dense, whole foods diet. I started supporting my liver by drinking lemon water every morning and began eating more cruciferous vegetables and leafy greens.  In the process of changing my diet, I had corrected nutritional deficiencies, identified symptom triggers and discovered I had several food intolerances that were contributing to my chronic pain. I also learned how to control pain and inflammation with diet and herbs, and eventually I started to acquire an energy and vitality that I hadn’t experienced since my teenage years. But the best part of altering my eating habits is that my MS symptoms became less and less frequent. Weeks and months turned into years. Not having symptoms became a new normal.

In September 2009, my life was again turned upside down. That was the difficult month my father was diagnosed with cancer. With my health challenges under control due to the many changes I had made to my diet and lifestyle, I felt that I could apply a similar approach to help him during his time of need. I immediately started researching and reading every book, article and study I could get my hands on that had to do with cancer and nutrition. It felt like a mission to save my dad’s life. But when I approached him with the bundles of literature, books, bottles and tinctures I had amassed, it was all taken with a grain of salt. I was just a fashion school graduate after all. Up until that point in my life, my expertise had been corset making, pattern drafting and hosting fashion shows — what did I know about health or nutrition? Just like I did when faced with a monumental health challenge, my father took the traditional approach, choosing chemotherapy, radiation and medication without radically altering other aspects of his diet or lifestyle.

Still, I kept trying to find ways to help. My thirst for knowledge and betterment wasn’t just about me anymore. I was discovering new and exciting nutrition information every day. Information that could potentially improve people’s lives, regardless of their health condition — and my desire to learn as much as I could and share this information became an overwhelming drive in my life. But more often than not, internet searches resulted in contradictions, misinformation, and propaganda. That’s when I decided to go back to school to study natural health and holistic nutrition, an endeavor that would once and for all provide me with the skills to sort fact from fiction, clinical methodology from pseudoscience. I was drawn to the science of nutrients, the epidemiology of disease and the profound relationship between nutrition and health.

Sadly, my father lost his battle to cancer in January 2012. I wouldn’t change anything else about my life except that I wish I could have found a way to help him. Yet I still believe every experience I’ve ever had — even living through the loss of my father, has brought me to the path I’m on today, and it’s a path I cherish. I feel like the biggest part of my own personal recovery is that I accepted the illness without succumbing to it. I embraced it, learned from it and kept moving forward. Perhaps if I hadn’t gone through this experience, I never would have discovered my passion for helping other people.

Over the years I have come to appreciate the complex links between body, mind and spirit and the profound connection these influences have on our health. Mainstream medicine does not emphasize the connection between poor nutrition and many of the common health problems people face.

As a Registered Holistic Nutritionist, my goal is to help others achieve optimal wellness and give guidance to those who are passionate about discovering their own path to vibrant health!

* The first module of the online Living and Thriving with Multiple Sclerosis program is now available! Enroll now and follow along as I release one new module each week! 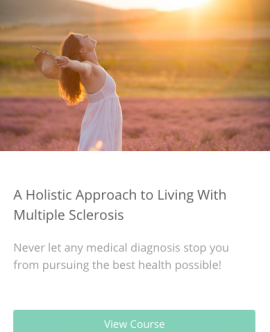 7 thoughts on “My Story”